There are three 14th century Tuscan poets who are generally regarded as the fathers of Italian literature—Petrarch, Giovanni Boccacio, and Dante Alighieri. Of these, two were unapologetic romantics who used poetry to express hopeless passions for unattainable women whom they idealized: Petrarch for his Laura; and Dante for his Beatrice.

Today, there is no doubt among scholars that Beatrice actually existed—unlike Laura, who many believe was fictional (see previous blog post). Dante’s Beatrice was born Beatrice Portinari in 1265, the same year and in the same quarter of Florence where Dante himself was born. Dante first saw Beatrice when both poet and Muse were only nine years old. “She appeared humbly and properly dressed,” he would later write of the encounter, “in a most noble color, crimson girded and adorned in the manner that befitted her so youthful age.” So taken was Dante with Beatrice that he invokes Homer to describe her beauty. “She seemed no child of mortal man but God,” he quotes.

On Good Friday in the year 1327, a 22-year-old Tuscan writer named Francesco Petrarca had an encounter at church that would change his life, not to mention the history of world literature. He would later write about it:

“Oh blessed be the day, the month, the year,
the season and the time, the hour, the instant,
the gracious countryside, the place where I was
struck by those two lovely eyes that bound me;”

The “two lovely eyes” were those of a young woman he calls, simply, “Laura.” Her beauty was such that after only seeing her once, and despite her being married to another man, Petrarca would devote the rest of his life to her, and would write his most influential poetry in her honour. Out of his anguished, unrequited love he composed one of the most famous sonnet cycles ever written, which he called Rime sparse (“Scattered rhymes”), but which is now more widely known as Il Canzoniere (“Song Book”).

In 1822, the famed essayist William Hazlitt wrote of the poets John Keats and Percy Byssche Shelley: “These are two poets, patriots and friends who have visited Italy within a few years, both of whom have been soon hurried to more distant shores.”

The “more distant shores” Hazlitt refers to, of course, are the shores of the River Styx—or to put it less poetically, death.

Percy Shelley and John Keats both wrote Romantic poetry, and both died in Italy within a year of each other. These two facts have made their legacies dovetail to a certain extent. But Shelley and Keats couldn’t possibly have been more different men. 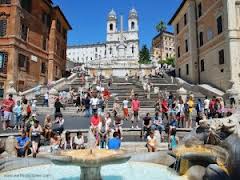 Haste, while the vault of blue Italian day

Is yet his fitting charnel-roof

So wrote Percy Bysshe Shelley in Adonais, his eulogy of the poet John Keats. Today, Keats is considered one of the finest English poets to have ever lived, despite the fact that he only wrote poetry for six years before his untimely death at 25.

Keats died of consumption (tuberculosis) in a house along the Spanish Steps in Rome, on February 21, 1821. He'd left England the previous September on the recommendation of his doctors, who believed the Italian climate would help cure him of his disease. Due to rough seas, however, and his boat being quarantined, Keats and his friend Joseph Severn didn't arrive in Rome until November 14, when the climate was not necessarily at its most restorative, nor the "vault of blue Italian day" at its bluest.

A few weeks ago, according to The Economist magazine, Italy’s new prime minister Enrico Letta “had reason to smile.” The country received its first bit of good economic news since Letta and his coalition government came to power. Italy was being removed from the “sin bin” of countries whose spending is deemed excessive—countries such as Britain, Spain, Portugal, France, and Greece—now that Italy’s deficit had dipped below 3% GDP, the so-called “Maastricht Ceiling.”