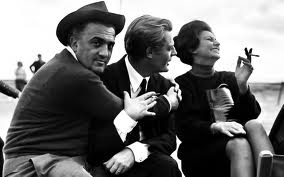 When Federico Fellini filmed his masterpiece, 8½, he allegedly taped a piece of brown paper next to the viewfinder of his camera with the words “Ricordati che è un film comico” (“Remember, this film is a comedy”) written on it. Fellini’s “comedy” went on to become one of the most influential films ever made. Today, Fellini is

considered one of the great pioneering auteur filmmakers; and 8½ itself has inspired countless imitations, by renowned directors such as Woody Allen, Francois Truffaut, and Rainer Werner Fassbinder.

In 1982, Nine (a musical retelling of 8½) dominated Broadway for over 700 performances.

In 2009 a film of the same name was produced, with the tagline “Be Italian!” splashed across billboards all over America, along with pictures of the film’s star-studded cast that included Daniel Day Lewis, Nicole Kidman, and Sophia Loren, among others.

“Be Italian!” The phrase is a refrain and alternate title of the song Ti voglio bene, sung by the mysterious prostitute La Saraghina to our hero, Guido, when he is still a boy on the beaches of Rimini.

“Be Italian!” to Hollywood promoters became a way to sell a film, a sort of marketting mantra tied up with the wealth and glamour of Hollywood itself. But the phrase meant something different in the musical. “Be Italian!” was how La Saraghina initiated Guido and his friends into the secrets of love, sex and Italian manhood.

In 8½—the original Guido story—the beach scene of the dancing La Saraghina (see video below) was even subtler still.

Here we see Guido witnessing for the first time the sexual power of women, what would later become a central influence in his life. But there is also something comic, poignant and sad in La Saraghina’s half-crazed, pseudo-erotic dance: the result, clearly, of Fellini’s little taped reminder—Ricordati che è un film comico—perhaps the original (and authentically Fellini) version of “Be Italian!”

Here is the beach scene from 8½, featuring Eddra Gale as La Saraghina, dancing La Rumba for Guido and friends: