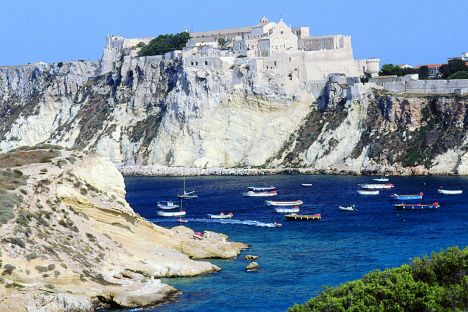 Benito Mussolini and his National Fascists were not the most nuanced thinkers when it came to issues of gender identity and sexual orientation.

Add to this the fact that Italy in the 1930s was devoutly Catholic—and you don’t exactly have the recipe for a gay-friendly society.

To deal with the so-called “evil” of homosexuality in 1938, the Sicilian city of Catania exiled about 45 gay men to a small island called San Domino, in the Tremiti Islands off the east coat of mainland Italy.

The men suffered poor conditions on the island, living in large barrack-style dormitories without electricity or running water. Worse, the men’s letters home show the extent to which they suffered crippling shame, ignominy, and self-hatred on account of their being homosexual.

“To become a soldier, and then return to the seminary to live in retirement,” writes one San Domino inmate, “is the only way in which I could repair the scandal and dishonour to my family.”

But not all former residents of San Domino found life on the island entirely disagreeable.

In an interview given decades ago now, a man referred to only as “Giuseppe B.” described San Domino as a sort of safe haven for gay men in Fascist Italy, arguably the only place where being gay was the norm, and where men could live entirely out of the closet.

“On the island… we would celebrate our Saint's days or the arrival of someone new… We did theatre, and we could dress as women there and no-one would say anything," he remembers, adding that some prisoners even wept when the outbreak of WWII forced them to return to regular Italian society.

Recently, members of the Italian LGBT community came together on San Domino to commemorate the former inmates of the island, and to remember and recognize both the positives and negatives of their exile experience.

For LGBT activists, the repression the men suffered under the Fascists in the 1930s serves as a lens through which to view modern homophobia in Italy—a country still that lags behind the rest of Europe in its acceptance and legislation of LGBT rights.

Says Vladimir Luxuria, an activist and spokeswoman for the Italian LGBT movement: “To fight against today’s homophobia, you cannot forget yesterday’s homophobia.”

To see her full interview with the BBC, follow the link below.

This email address is being protected from spambots. You need JavaScript enabled to view it.
www.italyandgolf.com
Tweet
Share
/