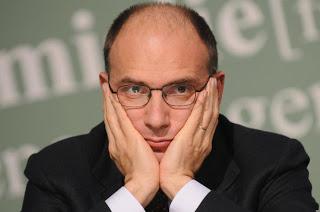 A few weeks ago, according to The Economist magazine, Italy’s new prime minister Enrico Letta “had reason to smile.” The country received its first bit of good economic news since Letta and his coalition government came to power. Italy was being removed from the “sin bin” of countries whose spending is deemed excessive—countries such as Britain, Spain, Portugal, France, and Greece—now that Italy’s deficit had dipped below 3% GDP, the so-called “Maastricht Ceiling.”

The economic austerity necessary to achieve this goal has not made Mr. Letta particularly popular. Last Saturday, tens of thousands of mostly unemployed Italians descended on Rome to protest Letta’s austerity, arguing that cuts are merely exaccerbating an already serious unemployment problem.

Notably, many of the protesters were young, reflecting how youth unemployment in Italy recently edged north of 40%, making Italy one of the worst eurozone countries to be young in.

“The future is bleak,” one young unemployed Italian told the news agency Press TV. “Nothing has been done to help [young Italians] get employed. It is the system itself that is against young people.”

Is the system really to blame? Are young Italians, and young Europeans in general, facing a crisis thanks to the inaction, or misguided actions, of their governments?

Whatever the answer to this question, the hopelessness and frustration of European youth is starting to show a darker side. Last week, in Sweden—which isn’t even part of the eurozone, and where unemployment levels are the envy of the continent—young people went on a rioting rampage through the suburbs of Stockholm and Malmö, generating tens of millions of kronor in damage.

While pundits dismiss the violence as racially-motivated (as in Paris in 2005, the children of immigrants were the ones doing the rioting), as usual race is merely a veneer covering more complex issues of economics and opportunity.

There is a general discontent among the youth of Europe, worsened by the way class and ethnic lines are dovetailing, but underpinned by a lack of constructive outlets where young people can expend their considerable energy.

Rather than build a future, therefore, they are breaking windows and torching cars, trying to tear apart the present.

This email address is being protected from spambots. You need JavaScript enabled to view it. www.italyandgolf.com